Urgh and ack! I've been suffering from a severe case of blogging brain-freeze.  In the past month, I've halfway written about 3 different posts and gave up in disgust on all three.  The writing seems to be the issue...oh, and my complete lack of time, but to combat at least one of these problems I've decided to do a post that consists mostly of pretty, pretty pictures. This means that you get to gander at pretty dresses and other sundry artifacts while I get to lessen my feelings of blog inadequacy and avoid hurting my brain with silly stuff like research.  However, in my anal mind fluff and frou-frou still need a theme and so, ye shall have it.  This Sunday a little group of history nerds calling themselves REGAL - Regency, Empire, Georgian Afficianados League will be having a tribute to Jane Austen's novel Emma with a Donwell Abbey Strawberry Picnic.  Since I'm the co-founder I should probably be there and while I'll more than likely be wearing some of my old Regency duds I'll be imagining myself in one of these numbers reminiscent of our scarlet fruit of honor...the STRAWBERRY. 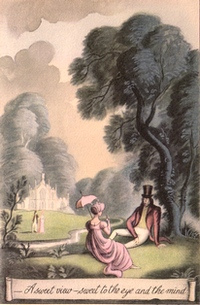 Happy "Wearing of the Green" to Ya!

Happy St. Patrick's Day!  Here's a quick post to celebrate the day with no...not green beer...but, with a bit o' green fashions from history.  Of course, you could always have a green beer while reading this post...seems perfectly reasonable.  Anyways, back to the bit o' green thing...well, why do we wear, dye beer and rivers green on St. Patrick's Day?  Most of us associate green with Ireland as the Emerald Isle...also, green is one of the three colors of the Irish flag and legend tells us that St. Patrick used a clover to teach the Holy Trinity to the Irish.  But, that's not all of the story...quaint little tidbits about the color green and the association with St. Patrick's Day are rampant on the web.  A bit deeper and darker connection to the color green may rest with the Irish Rebellion of 1798.  Inspired by the revolutions in America and France, a republican revolutionary group known as the United Irishmen began a violent uprising against British rule in May of 1798.  The fighting "officially" lasted until September with an enormous loss of life; pockets of rebels continued guerrilla warfare until about 1804.  The Society of United Irishmen had adopted the color green and the wearing of a shamrock as their symbol of resistance. (The History of the Irish Rebellion, James Gordon) The old Irish street ballad, "The Wearing of the Green" sings of this practice, proclaiming that, "they're hanging men and women there for wearing of the green" (listen to the song here). As such, many historians claim that the tradition of wearing green on St. Patrick's Day owes as much to this tragic episode in Irish history as it does any other theory.  I'm not a real fan of modern day St. Patrick's Day celebrations...however, I am a big fan of green...it's one of my favorite colors, so bring on the wearing of the green!